Did you know that each year knee osteoarthritis causes around 195.000 knees replacements in Germany? Surprisingly, around 30% of the patients are younger than 65 years. As these patients are relatively young, they have a higher chance of a second more complex Total Knee Replacement (TKR) later in life. In general, the quality of life decreases after a TKR due to lower function compared to a natural knee.

We interviewed Jan Carel Teding Van Berkhout, Business Developer from ArthroSave, about the innovation that could solve this problem: the Knee Reviver. Here is what he had to say: 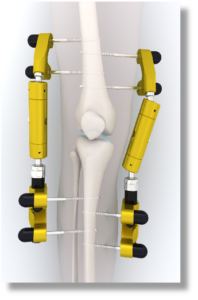 ArthroSave developed the Knee Reviver in collaboration with orthopaedic surgeons, researchers and patients. It is the only device with intended use for knee joint distraction. The device unloads the damaged knee joint and can delay the first TKR and therefore possibly eliminate a second TKR. The KneeReviver consists of 2 tubes placed on both sides of the knee, it is fixated to the bone by eight bone pins and it unloads the knee joint by creating space between the joint surfaces. It is allowed to bear weight during treatment, however it is not possible to bend the knee. After 6 weeks, the KneeReviver can be removed and the patient will enter the rehabilitation phase.

How does it impact patients’ health/healthcare

Clinical studies have shown that by using the KneeReviver, it significantly reduces pain, improves function, and it might regenerate the knee joint tissue. Furthermore, a clear need for disease-modifying solutions to improve the treatment of knee osteoarthritis was expressed by different health professionals. As mentioned before, the KneeReviver could postpone the first Total Knee Replacement. This is one of the reasons this device was developed.

What is the story behind the innovation?

Jan Carel: “The phenomena ‘distraction’ has been around longer than today. The body regenerates bones and tissue but cartilage was long thought of as impossible to grow back. The orthopedic physicians at Utrecht Medical Center indicated that there are young patients whose knee could be preserved longer, for which a total knee replacement would be postponed. The clinical need/wish came from the medical field itself. Based on this and clinical evidence, we developed the KneeReviver”. 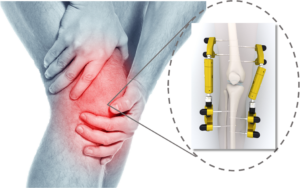 Any success stories that you are most proud of?

‘Yes, many. There is one story that will always stick with me and I often use it as an example. I had an interview with a woman who had a treatment with the KneeReviver around 2 years ago. She said: “Six weeks was not so nice, but it was worth it. I would do it again if I had to”, After two years, she was still able to do everything. She walked and biked around without any trouble. I think that this example was quite remarkable. Another story is from one of our first patients who had the same surgery many years ago. This patient had been suffering from his knee for years. Thanks to the Knee Reviver, his TKR was eventually postponed by 16 years, and he was able to work in a wine yard all those years without any severe problems.

In general, we have quite a success story on a larger level. When we first started, the waiting lists were very long, the demand was high, and sometimes we had to turn people down. Currently, we are working hard every day to give more people the opportunity to be treated with the KneeReviver.

What is the most valuable tip about innovating healthcare that every entrepreneur could learn from?

‘Often entrepreneurs focus a lot on the technical side of the product and they forget the person who is supposed to use it. In our case, they are orthopedic surgeons. We had to understand their way of working and behavior. They will break out of their comfort zone when they start using this product or any product for that matter. So, my main tip: pay attention to the workflow of the end-user and try to understand them.’

Are you interested in ArthroSave and/or do you want more information? Contact Mirte Cox via email: mirte@medscaler.com.

Are you working on an innovation that is interesting for ArthroSave? Let us know via innovators@medscaler.com

Would you like to become part of the MedScaler Innovators Club? Join here.

This website uses cookies to improve your experience while you navigate through the website. Out of these, the cookies that are categorized as necessary are stored on your browser as they are essential for the working of basic functionalities of the website. We also use third-party cookies that help us analyze and understand how you use this website. These cookies will be stored in your browser only with your consent. You also have the option to opt-out of these cookies. But opting out of some of these cookies may affect your browsing experience.
Necessary Always Enabled
Necessary cookies are absolutely essential for the website to function properly. This category only includes cookies that ensures basic functionalities and security features of the website. These cookies do not store any personal information.
Non-necessary
Any cookies that may not be particularly necessary for the website to function and is used specifically to collect user personal data via analytics, ads, other embedded contents are termed as non-necessary cookies. It is mandatory to procure user consent prior to running these cookies on your website.
SAVE & ACCEPT